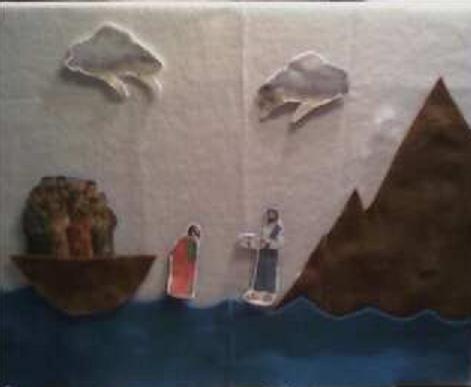 Awesome title right? This is a lesson I wrote to teach at Tempe’s Youth Group. I’ve actually programmed this to post at the same time as I’m giving the lesson, which is awesome in way too many ways. I retooled it so it’s less presentation and more blogy,  but if you want to know what it was like in presentation form, just imagine me saying all of this while standing in front of this flannelgraph (which, yes, I made)!

So in the Bible we have this story where Jesus goes walking on the water because his disciples are in a boat way ahead of him. The freak out and think he’s a ghost, but Jesus says it’s him. Peter asks to come out on the water, and he does, but then he gets scared and starts to sink. Jesus catches him and tells him to have faith. Many sermons about this passage have been preached about how if we trust Jesus, we can do the impossible, but we have to trust him, but even if we don’t trust him, he’ll catch us. And that’s all fine and dandy and there some good truth there. This is the story we all heard growing up, right?

The only problem is, one of our versions of this story, from the gospel of Mark, doesn’t say anything about Peter getting out of the boat. Apparently, for Mark, there is something else going on in this passage, something deeper, that is more important to get than anything about stepping out of a boat, having faith to do the impossible. Like one of my favorite authors and pastors says, there’s always a story behind the story, and the omission of Peter’s part of the story really shows this here. Why would Mark even put the story in his gospel if he was going to leave out the main part? Because the most important part of the story, for Mark, has nothing to do with faith, miracles, or Peter at all.

efore I go on, I need to be clear here: I’m not saying that Mark has it right here and the others do not. What we understand about the Bible being composite literature is that different authors had different emphases, motives, audiences, and told the same stories in different ways. If anything, I’m taking the Bible more seriously by insisting that Mark’s seeming omission was not an error, but an intentional highlight that has depth and meaning for his first readers and, by default, us today.

The key word to remember as we proceed is the word “theophany”. This comes from two Greek words, “theos” meaning God and “phainei” meaning to appear. Together, they mean a God-appearance, a God-sighting. There are many examples of theophanies in the Old Testament, most notably with Moses at the burning bush and on Mount Sinai, and Elijah on Mt. Horeb. If you read these passages (Exodus 3, 20, 1 Kings 19) there are themes and motifs consistent with our story in Mark.

The first is the presence of a mountain. The story opens with Jesus on a mountainside praying. Mountains bear incredible symbolism in the ancient Jewish world, and especially with these theophany stories. It’s like when you hear someone say, “So a guy walks into a bar…” You know immediately that that person is telling a joke. When a biblical story talks about a mountian, to a similar extent, the early readers would immediately think of all the foundational historical events that happened on mountains.

Secondly, walking on water is not an entirely new concept. Job 9:8 reads, “Who alone stretches out the heavens and tramples down the waves of the sea.” Tramples. How about Psalm 77:19 – “Your way was in the sea and Your paths in the mighty waters, and Your footprints may not be known.” Jesus walking on water is a deeply symbolic act of something that only God does, and a good Hebrew that new the Old Testament would know these texts by heart.

The third and probably strongest case for theophany is in the wording of Jesus’ intent. The stoy says Jesus intended to “pass by”. What? His disciples are afraid for their lives and confused and in danger and Jesus is going to walk on by? This makes no sense to us, but to an early Jew, this was incredibly meaningful, for to “pass by” is the language of theophany. God told Moses that God would “pass by” when he gave the law to the people for comfort and discernment. Elijah was told to wait in the cave because God would “pass by”. When God passes by, comfort, awe, discernment, and peace follow.

The final clues are in the words of Jesus. Jesus says, “Take courage, it is I, do not be afraid.” The msot obvious thing here is “do not be afraid”, which is the wording used in basically every angel visit EVER (and at the burning bush). But the more profound statement is “It is I.” The Greek used is “ego eimi”, which literally translates “I am”. This is important, because the Hebrew of “I am” is something we’re all familiar with: “Yahweh”. The divine name. The name God gives to Moses at the burning bush. Jesus here isn’t jsut saying, “Hey guys, it’s me, your friend Jesus!” He’s invoking the powerful name of the God of Israel.

As we can see, at the very heart of this story, the sotry beneath the story, is a theophany, a God-apperance. The early readers would have recognized this. They would’ve remembered how in the past when theophanies happened, when God “passed by”, it brought hope and peace and change.

But the story doesn’t end there. Because Jesus was intending to pass by, but that’s not what he does. Jesus intended to offer comfort and peace and hope and change by showing a theophany, but something happened that would’ve shocked and surprised the early readers. Jesus got into the boat. In light of these theophany stories, this is an abrupt and radical change. I would even say that the real miracle here is not Jesus walking on water, because God can do that, no problem. While it may have shocked the disciples to see, the readers who already knew Jesus was God, would’ve been far more astonished that Jesus, who intended to “pass by”, instead got into the boat.

I want us to consider how profound this idea is here, because it’s not a new one. Essentially this is the Christmas story. God became man, the word became flesh, at the darkest time in Jewish history. God throughout history had operated in this particular way, through theophany. God certainly acted in very real ways like the exodus and exile, but God’s appearances were always “passing by”, giving comfort, revealing presence. But what we celevrate at Christmas is that God changed this strategy. God stepped into history through Jesus, allowing people to actually see God in a new, refreshing way. God essentially says through the incarnation, “Ive been trying all along to show you how to live in right relationships, but you’re just not getting it. Here, let me show you. Watch this!” That is the story behind the story here, a reminder of the way Jesus changed EVERYTHING. A reminder that in our darkest times, God isn’t just saying, “Hey, it’s ok, I still love you, don’t be so down!” God is saying, in those dark times, “I’m not passing you by. Move over, I’m coming in. I am WITH you.” May we as followers of this Christ, the ultimate demonstration of God’s love, accept that love and allow to change us and move us from those dark places into restoration and life.