For those that follow me on Facebook, I was pretty vocal on the Chick-Fil-A scandal a few weeks ago. Basically put, the CEO of Chick-Fil-A made a statement that he supported a biblical definition of marriage, excluding same sex marriage. This, of course, sparked controversy and turned eating (or NOT eating) a chicken sandwich into a political statement. This sparked at least two amusing tweets:

And the always hilarious Conan O’Brien:

But this blog post is not about that. To me this is old news, over and done with, and I’ve already said my peace about it. The reason I am resurfacing this is because of another Tweet that caught my eye that day. I remembered this particular one because it represents a classic rivalry between Religion and Science, a debate that caught my eye again with a video I saw last night. But we’ll sort through all that in a minute. Here’s the Tweet:

Ouch. That stings a bit.

It’s a little unfortunate for us that these events happened at the same time. Sure, this Tweet is one-sided, and at least a little unfair. But it should also be convicting. In the grand scheme of things, we spent a day arguing about chicken while the world watched as unbelievable technology landed on Mars.

I’ll admit outright that I’ve never been all that intrigued by astronomy. I never wanted to be an astronaut, I’m not all that into sci-fi… and along those same lines, science classes were always my least favorite, and my lowest grades.

And this has always come as a surprise to people, considering my last name. From kindergarten to college, people managed to make the connection that I share a last name with the exuberant and brilliant Bill Nye the Science Guy. Funny enough, everyone always thought they were the first person to make that connection.

I do enjoy Bill. I refer to him affectionately as Uncle Bill, even though there is no relation. From his quirky show on PBS to seeing him as a meteorological expert on CNN during the storms in Japan, Bill always had a knack for making science relatable and accessible, all while rocking an amazing bowtie.

A video surfaced within the last couple days where good ol’ Uncle Bill seems to have an agenda. In the video, Bill Nye addresses the age old debate of creationism vs evolution in a way that left many less-than-thrilled.

Again, harsh! Uncle Bill seems to have an axe to grind!

Now I’m probably going to get in trouble here… but I think Bill Nye is right. But… I also think he’s wrong. Let’s see if we can parse this out.

To help explain how I think Bill Nye is right, let’s take a walk down history lane. There once was a man named Copernicus. Copernicus made an incredible discovery: contrary to popular belief, the earth is not the center of the universe, but rather, all planets in the solar system revolve around the sun. This was an amazing scientific discovery, as it helped explain previously-unexplainable phenomena, and it allowed many more discoveries and theories to be made about the world around us.

This view was unpopular, however, with the Church, because it contradicted a particular understanding of some scriptures. Psalm 93, and some portions of Job, suggest that the earth is stationary and unmoving, and that the sun and moon rise and fall. Therefore, any “science” that said differently must be heresy. Copernicus’ ideas were banned, and defenders like Galileo stood trial for attempting to persuade the Church that they were misguided.

It wasn’t until much later that the Church’s official stance regarding this changed. Obviously, the integrity of scripture was maintained because it is clear that the writers of Job and the Psalms were not doing science. The Psalms are songs and poems, and Job is something of a drama. Neither wish to tell the reader in a scientific manner the positioning and arrangement of our solar system. With a more proper reading of the scriptures, it was possible to be both a Copernican and a Christian.

I am convinced that it is similarly possible, and necessary, to believe in evolution and creation, or evolutionary creation.

Genesis 1-2, if read in the original Hebrew (or even English), do not read like a data sheet or a science textbook. It reads as poetry. There is rhythm, repetition, structure, word-play, and flow to it. The importance of the creation story is not about the specific details of how it happened. The story is written to make theological claims about the origin of humanity.

If you don’t believe me, take a look at Genesis 1 and 2 and note that there is not one but two creation stories, and that they don’t match up. Here’s a helpful chart: 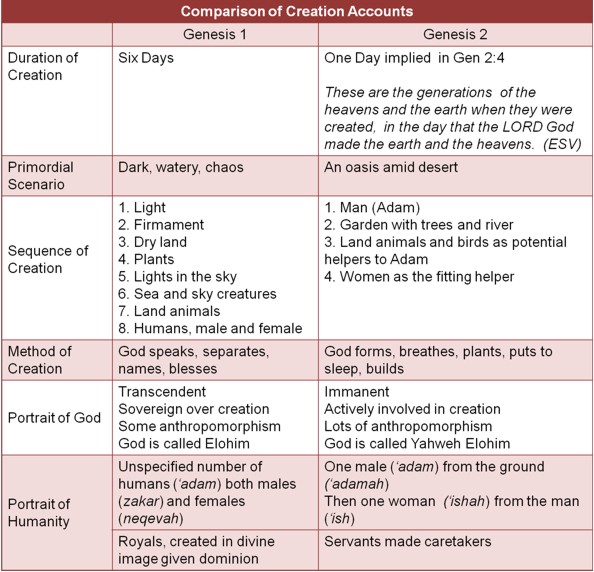 The great thing about this chart is that not only does it show the discrepancies between the stories, but it also leads you to some conclusions about why we have different versions, and why most biblical scholars believe multiple sources and traditions make up our Old Testament. Notice how the second story uses Yahweh, a name not given until later, and God seems more actively involved. These two stories show us multiple attributes of God and how God relates to humanity, in both sovereignty and activity.

As I’ve already said, I’m not much of a scientist, but I have seen no evidence, anywhere, of evolution being untrue or of the universe being only 10,000 years old, EXCEPT from those who defend a literalist interpretation of Genesis. And personally, I think that in 250 years we will look back and laugh at how long we defended that, just like we do with the controversy over Copernicus. As Bill says in the video, we’re the only country that still resists evolution as truth, and our universe and all the amazing scientific advancements of the last 100 years don’t make sense without evolution.

Now… here’s where I think Bill Nye is wrong.

Bill goes on to conclude that we need to stop teaching our kids creationism, because we need a generation of scientific thinkers and voters to help save the world from the mess we’ve put it in.

I’m forced to disagree with Uncle Bill on this one, for the same reason that I critique Christians misusing scripture to disprove science: science and religion operate in different academic schools, period.

“God created the world out of love and created humanity on purpose and for a purpose” is a theological claim.

“Our galaxy came to formation with the collision of subatomic particles 4.5 billion years ago, and all of life came to existence from one single-celled organism and billions of years of evolution” is a (long) scientific claim.

Theological claims and scientific claims cannot, by definition, contradict one another. They operate on different playing fields.

Science cannot say, even if some have tried, that God does not exist. God is not an observable fact, making God nonscientific. By the same token, Christians cannot use scientific proofs or data to show that God exists. It doesn’t work that way.

So why then, I ask, is science and religion always battling?

I hope that this post, whether or not you agree with it, causes some thought. This is a war we all need to stop fighting, because it imply cannot be won. If we as Christians would withdraw from the fight and say, “You make your claims and we’ll make ours”, and realize that one can believe in evolution and the Big Bang and still love Jesus and be true to the Bible, I imagine that science would lay down their arms as well. And, if they didn’t, then we ought to thank God for the opportunity to put into practice “turning the other cheek”.

So there. I’ve outed myself. I believe in science, and I believe in Jesus. And I believe that God is big enough to encompass the truths of both scientific and theological claims, as long as they are true, and I think it does no damage to the Truth of the Bible… so long as we learn to read that Truth as it was originally intended and not with the wrong eyes.

60 thoughts on “On Mars, Chicken Sandwiches, Creationism and Bill Nye the Science Guy”