(Looking at Turner’s famous 1839 painting of the soon to be scrapped battered British gunship, The Fighting Temeraire)

Q: It always makes me feel a bit melancholy. Grand old war ship. being ignominiously hauled away to scrap… The inevitability of time, don’t you think? What do you see? 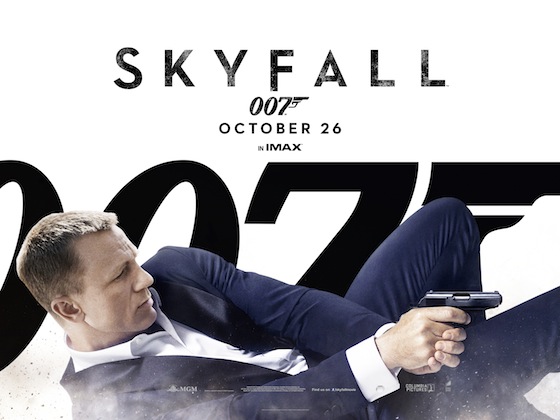 Skyfall, the 23rd entry in the Bond franchise, is something else entirely. It’s more than a Bond movie; it’s a Bond film. It’s actually about something more than a hero chasing a villain. There certainly is that – and the action is top-notch – but it contains a deeper theme, made explicit in smaller scenes like the one I shared, one that I think the Church can learn from. A key word in the movie is “Resurrection”. And this is a word that deserves our attention.

Another key moment comes as M quotes Tennyson’s poem Ulysses, as the villain approaches to assassinate her, and Bond runs through the streets of London to stop him:

Tho’ much is taken, much abides; and though
We are not now that strength which in old days
Moved earth and heaven; that which we are, we are;
One equal temper of heroic hearts,
Made weak by time and fate, but strong in will
To strive, to seek, to find, and not to yield.

A James Bond film with classic art and poetry. Not a bad start.

“Classic” is probably the best way to describe this film. The musical score harkens back to the Bond of old, beautifully; classic Bond elements are sprinkled in, such as the Connery-era Aston Martin, complete with ejection seat and headlight-guns. (That are shown and yet, somehow, not used in a cheesy way.) There a variety of women that Bond sleeps with. The movie is actually rich with easter eggs for Bond fanatics: one henchman looks vaguely like Oddjob, and the main villain, when shown in his disfigured state, is reminiscent of the old Bond villain Jaws. Not to mention, he operates from a secret island. The villain’s behavior even reminds us of the good old days, when Bond villains were flamboyant and deviant.

But not everything is “classic”. This is not the Bond your parents grew up with. The musical score is classic, but there are also some electronic, contemporary tracks, like when Bond hunts a assassin in the darkness of a Shanghai skyscraper. While several Bond elements are utilized, Bond is ultimately deconstructed over the course of the film, such that in the final scene, Bond’s car is destroyed, he has no gun, no suit, no “girl”; just a man and a knife. And while the villain is flamboyant and chatty, Bardem brings a darkness to him that is chilling and disturbing, not unlike his turn in No Country For Old Men, or the darker villains of Nolan’s Batman trilogy.

But what is likely the greatest evolution of the franchise is its treatment of women. Gone are the days of stereotypical Bond-girls. From Ursula Andress on, women in the Bond movies had forever been helpless, witless sex objects. Some were villains, some were allies, but all were exploitable. But when Pierce Brosnan became Bond, one important change happened, which found its fruition here: the role of M was given to a woman, Judi Dench. For the first time, Bond had a female in authority over him, giving orders and challenging Bond’s sense of gender.

About ten years later, when Daniel Craig became Bond, the reboot of the series showed Bond risk loving someone and being betrayed,perhaps exploring his character to understand why he is the way he is towards women. The next entry featured a complex relationship with the “Bond-girl”, played by Olga Kurylenko, that was never consummated. And finally, in Skyfall, the two females are drastically different. First, you have the woman who is revealed to be Moneypenny; in the films of old she was merely a secretary who wanted Bond, but whom he just strung along. Here, though, she is a former agent with some great action scenes. The other Bond-girl is a victim of sex-trafficking, who finds empowerment to stand up to an oppressive lover by bringing Bond to the villain’s secret island. This is crucial: the movie takes very seriously the plight of a victim of men’s sexual exploitation – something that Bond himself might be accused of throughout his history.

One article I read suggested that in the Daniel Craig era, we have to refer to them as “Bond-women” now, rather than “Bond-girls”. There is a maturity exemplified by the presence of the women in the films now, and a respect that Bond has for them. And in Skyfall, the most important woman in Bond’s life is an authority figure, M. M takes on a parental role with James, and her death is probably the most emotional moment in Bond history. And Bond cries! One of the most lauded symbols of masculinity cries over the death of a woman who he wasn’t sexually involved with. This is clearly a new 007.

In the middle of the film, Silva taunts Bond by saying: “Is there nothing left of the old 007?”

This is the question the whole movie is trying to answer. And the answer that the movie proposes is Resurrection. Bond even calls Resurrection his “hobby”.

And as Christians, we know a lot about that word.

Let’s use the most obvious example. One really strange but important note to make about the resurrection of Jesus is that when he came back, nobody seemed to recognize him. Something about his physicality changed. He was able to pass alongside his disciples as if he were an anonymous traveler, and to Thomas had to “prove” who he was, by showing him the holes in his hands and side.

This is why the word Resurrection is so important to our faith. Sometimes we forget that this word is distinct from words like “reanimation”, “reincarnation” or “revival”.

“Reanimation” is simply the bringing of life back to dead flesh, a la Frankenstein.

“Reincarnation” is the transportation of a spirit into an entirely new body and existence, bearing no memory of the past, a la Hindusim.

“Revival” is the bringing back to life that which was not fully dead, a la CPR.

“Resurrection” is the bringing back to life of something dead, but with new qualities and new life. It’s the same, but it’s also different. What is new is not always recognizable as the old, but the old is still there. Something has died, something has risen.

Bond helps us understand that.

The Bond franchise is itself resurrected in this movie. Everything “Bond” is deconstructed; he loses the girls, the car gets blown up, no suit, no gun. He’s holed up in the house he grew up in, confronted with his past, and it changes him. No, Bond does not die, but only Jesus can get away with that.

It is only after Bond goes through this deconstruction that the old Bond elements are added back. The final scene introduces us to Moneypenny, the new M, the classic office with the leather-covered door, a new mission, and the legendary sequence concludes the movie:  we are told “James Bond will return”.

But the Bible uses this more than literally, so I do too. Resurrection, for us, means that things change. Some things die, but out of that death, new life springs forth. Things that feel dead, like relationships, careers, hopes and dreams, even faith… these things can experience Resurrection. Something new can come to life; something that bears the marks and character of the old, but yet is vibrantly and refreshingly new!

I think Resurrection is not only a hobby of James Bond, but it is also a hobby of the Church, or should be. The Bond movies have evolved over time, reflecting the nature of the world out of which each movie comes. The nature of women in Bond films has changed because the Western world has rethought and continues to rethink the ways in which we view gender. Similarly, the Church has had to grapple with the idea of women in ministry.

While I don’t want to use this word flippantly as it se often is, “postmodernism” has affected the Church in many ways through deconstruction: we are in the process of taking apart “Church” to find out what’s still there. And what’s really interesting is that these movements to deconstructionist churches, when they’ve found their way to the core and begun to build again, often engage in ancient practices of feasting, liturgical worship and prayers, and a fascination with the sacraments. This is not unlike our deconstructionist Bond movie ending with the characters M, Moneypenny, and Q and an old-timey video sequence. 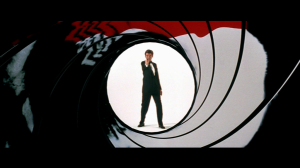 I think the fear of deconstruction, the fear of change, is that if we change too much, there won’t be anything left. I imagine there are some in churches echoing the words of the Bond villain, “Is there nothing left of the old ‘Church’?” But I challenge us all to see that while Resurrection involves a deconstruction and a death, it also means new life.

And, some things go on. Some things never go away.

Sure, we have a blonde Bond now. And when that was announced before Casino Royale, people were furious. Now, Daniel Craig is being heralded (even by former Bonds) as the best Bond ever.

Because it turns out Bond wasn’t a hair color.

The answer, according to Skyfall, is yes: because of Resurrection. Many things change, but Bond goes on.

In an age where the place of the Church in society is being questioned, our answer should be Resurrection as well. We ought to enter boldly into the questions of what things are enduring, and what are old-fashioned. This goes for theology as much as practice. When we deconstruct everything, what will we find?