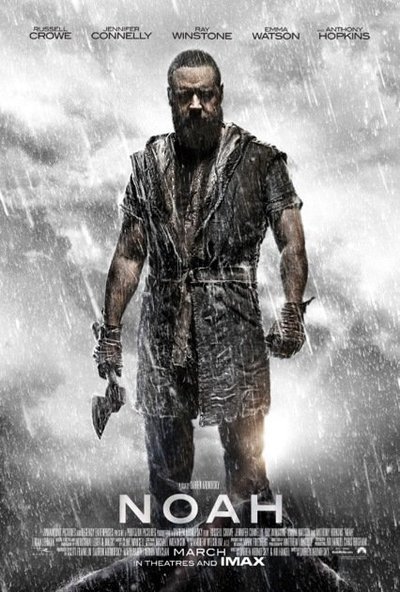 If there was ever a film ripe for theological dialogue, it’s “Noah”. However, my posts are usually initiating a dialogue between faith and film; this time I’m joining it. “Noah” has stirred up controversy, and I’m afraid that the direction it is headed has done more harm than good.

But first, a story.

In my undergrad, I was asked to write a “children’s sermon” for a systematic theology class. I struggled through this assignment, because I am wholly and unabashedly NOT called to children’s ministry. While I was struggling with what to write the night before it was due, I naturally thought about all the bad children’s sermons I had heard, and began to meditate (read: not work on my assignment) on how the Church tells some of the most disturbing Bible stories to their children. In an effort to spoof this and provide some satire, I wrote a sermon and turned it in called “God wants to kill you with she-bears”, based on the story of Elisha. You can enjoy it for yourself  here.

I even got to read it aloud in class, and my professor and fellow students enjoyed it a lot. My dad, to this day, will read it anyone who will listen to it. And while it was mostly just a funny thing to write and present, I also intended it as a critique of telling horrifying stories to our children. The one that immediately came to mind was the story of “Noah”.

And I know you have all experienced this too. How many of us grew up with coloring pages of the Ark, or had a big mural on our church wall, or reenacted the play in animal costumes, all under the age of 8? I bet that most of us knew the story of Noah before we knew how to read.

But the story is not about cute animals on a boat. It is a story about judgment, about mercy, about chaos and sadness, a Creator who will not give up but must make things right. (Read: it is NOT a story for children)

With that in mind, since I am joining a dialogue already in progress, I have decided to respond to the most common Christian critiques of Noah that I’ve seen, in the form of address:

To those who thought that Noah was “too dark”

What the movie showed us, and many Christians wanted to reject, was that this is one of the darkest stories in the Bible. God literally drowns out all of humanity except one family and the animals. This is a terrifying story about judgment, and should be handled with care, not with coloring books.

I encourage you to read the story again. Ponder on the idea of being called to survive a flood that kills everyone, and the psychological effects that might have on you. Ask yourself what it might be like to be put in that position, and the doubts you might have, and the questions you would want answered.

Because we were all told this story as kids, we saw it in black-and-white. Those people were good, those people were bad. The good person got to live and the bad people died. But as adults we know that the world is more complicated than that, and we have to re-read this story and ask some of the harder questions. I believe that is one thing this film was trying to do.

Welcome to biblical studies. We all make interpretive leaps, whether we realize it or not. Interpretation is simply what happens when we read anything: our brains are reading our own experiences, outside knowledge, assumptions (true or not) into the text between the lines. Let me give some examples:

Do you believe in the Trinity?

Do you believe in the Fall?

Do you believe that the snake in the garden was Satan?

The Bible tells us none of these things. They are all “interpretive leaps” that we make in an effort to make sense of the larger biblical narrative. And just to make it very clear, not all Christians share these conclusions. They are interpretations. I, for one, do not believe that the snake is representative of Satan. But that is for another post. The point is, it is impossible to read the Bible without interpreting the Bible.

It’s also impossible to make an interesting movie about the Bible without filling in some gaps. The Passion of the Christ did it, Son of God certainly did it. And I am actually impressed that “Noah” did it while keeping the spirit of the larger Genesis story, which leads me to this:

To those who think the story is “unbiblical”

Again, I encourage you to re-read the story. The film actually portrays a very informed, close reading of Genesis 1-10. The director, Darren Aronofsky, included elements like the Nephilim, (which many Christians haven’t heard of because their preachers are too scared to talk about it,) and the inclusion of Methuselah, who, based on the ages and times given in the Genesis accounts, would have been alive for the flood event mathematically. Aronofsky also weaved together the whole account of Creation, Adam and Even, and Cain and Abel to great effect, much like the Genesis account does in its syntax and story-telling. The flood story truly is an un-doing of creation; just as God separated the waters above from below, in the flood, water comes down from the heavens and up from the earth.

Certainly, this movie included things that were not in the text. These are the “interpretive leaps”, filling in the gaps. But as we know, this story of the Flood was passed down orally for hundreds and maybe thousands of years before it was written down in the version we have. And we also are all keenly aware of, every time a story is told by a different person, it takes on new life. A person adds their own details or emphasizes one character or hones in a specific theme to tell a story because it means something to them or their audience, Stories are wonderful in that way: they don’t just exist on their own as a list of historical facts but they breathe and have life and can be given meaning and significance through their telling.

Darren Aronofsky told the story in his own way. And while he may not have told it word for word from the biblical text,  I think he was very true to the themes of the story and helped me and many others to understand it in a deeper way. Which leads me to one more address.

And to those Christians who think this is “our story”

It’s not. The story of Noah’s flood actually belongs to the Jewish community, which you have been adopted into. That means that you can celebrate that the God in Noah’s flood has been revealed in Christ, but it does not mean that you now can take that story and read it in your way.

This means that when you get upset that the movie never says, “God” but rather, “Creator”, you’re ignoring that the Jewish community has so much respect for God that they refuse to utter that name, but rather use terms like “Creator” or “Father” so as to not disrespect.

In the end, I think this was a great film. I barely have time at the end of this post to address the beautiful, theological and God-honoring themes it contained: like what it means to care for God’s creation, the balance of judgment and mercy, the promise of new-life, the provision of God or the experience of doubt in one’s calling. Instead, I spent an entire post defending a movie from the people that should’ve been supporting it.

It’s a sad day for me, because I learned a while ago that God could move through film and I’ve wanted to share that with everyone. It’s why I started writing about it here and why I taught a class on it at my church. My belief is that if we can engage film with an open mind, we might be able to partner with God in bringing people into our community who might not otherwise find their way.

“Noah” was a perfect opportunity to do just that. And we blew it.

An esteemed director took a story from the Bible and brought it to life, highlighting themes of God’s love and faithfulness, of justice and mercy and compassion. One of the hardest, most difficult stories, no less, and handled it with care and creativity and made the audience feel the anguish of Noah and also empathy for a world that should be more like the Creator wanted.

$40 million worth of ticket sales in its opening weekend, this movie likely made a lot of non-Christians think that the Bible might have something for them. If “Noah” succeeded in making them feel something, or even gave them the slightest inkling that they could believe in the type of Creator this movie lovingly portrayed, then perhaps they could’ve looked at the Bible with fresh eyes.

Instead, the Christian world shouted from the rooftops (read: Facebook posts): “THIS MOVIE HAS NOTHING TO DO WITH THE BIBLE!”

And so that one person, or ten people, or hundred people, or maybe even thousand, who might have come to the Bible believing it had something for them, were told that what they experienced was not God, but just a movie that was “not Christian”. And so, as they did before, these people will look elsewhere to find what they’re looking for.

God help us. This has been a hard couple weeks to be a Christian. World Vision tried to show that serving the poor was more important than a silly debate… and they were proven wrong. 10,000 children lost sponsorships, and World Vision had to change their minds. And then a non-Christian director put his admiration of the Bible on screen and millions of people saw it and maybe experienced admiration of their own… and we told them they were wrong.